By Stephen Adams, Health Correspondent For The Mail On Sunday

A poisonous toxin found in freshwater lakes and reservoirs across Britain could be fuelling the country’s dementia epidemic, scientists fear.

Researchers have found the first direct evidence that a chemical, produced by algae, might be linked to a range of devastating neurological conditions including Alzheimer’s and Motor Neurone Disease (MND).

The toxin – sometimes a by-product of increasingly common blue-green algal bloom – has been found in seafood and plants, through which it is feared it enters the food chain.

Now experts have highlighted a growing body of evidence suggesting the toxin, called BMAA, could trigger brain disease in humans. 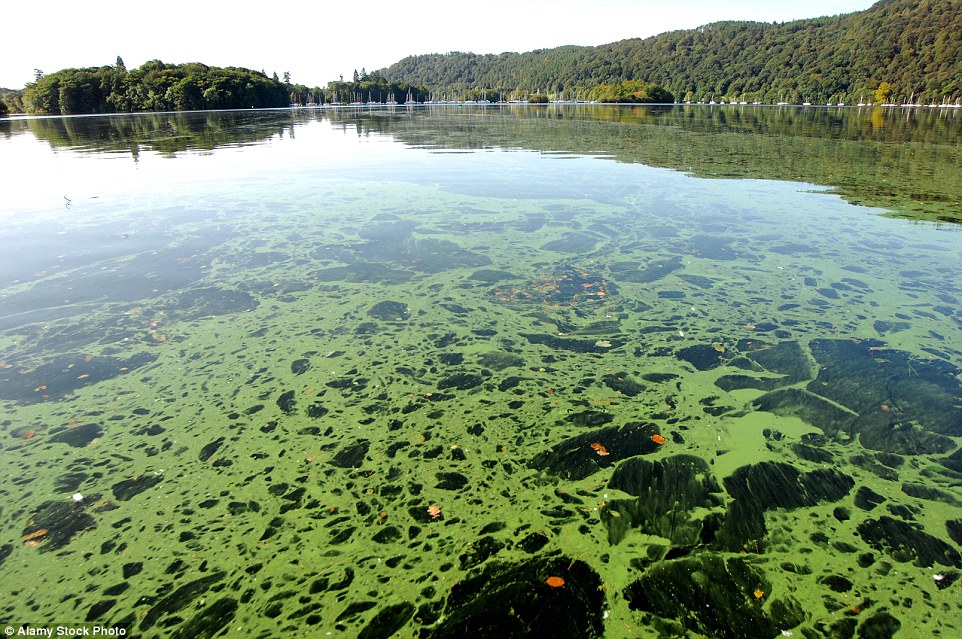 Poison: Researchers have found the first direct evidence that a chemical, produced by algae, might be linked to a range of devastating neurological conditions including Alzheimer’s and Motor Neurone Disease (MND). Pictured, blue-green algae on Lake Windermere

If the link is confirmed, the chemical would be the first major environmental factor linked to increasing rates of Alzheimer’s, which is predicted to affect more than one million Britons by 2050.

The latest research, revealed to The Mail on Sunday, shows:

Although the link to the food chain has yet to be established, seafood including French mussels and oysters, and Portuguese cockles grown in estuaries have all been found to contain BMAA.

The toxin appears to be widespread in British inland waters, with blue-green algae samples from 12 freshwater lakes and reservoirs across England, Scotland and Wales testing positive. 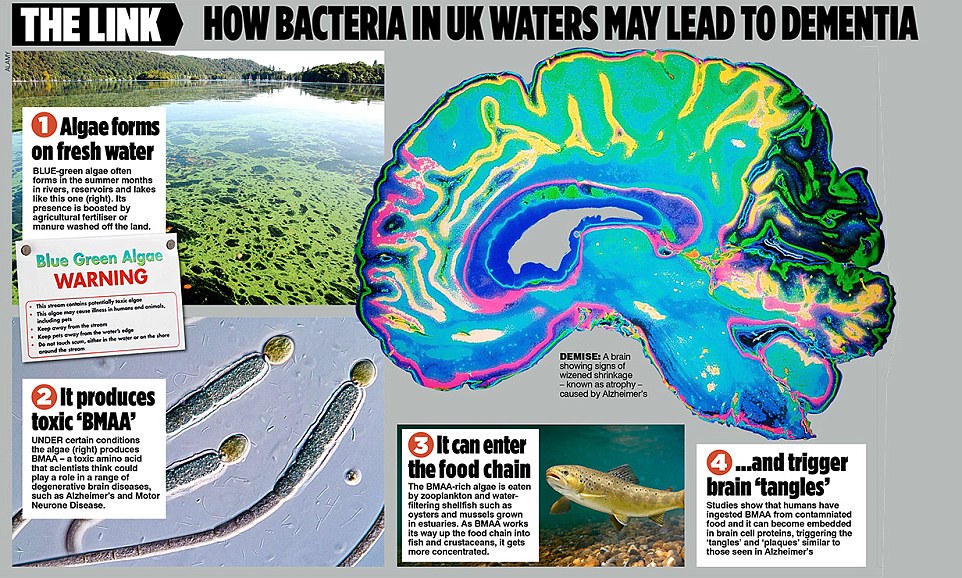 Professor Paul Cox, one of the leading researchers in the field, said the poisonous toxin could be a ‘third factor’ behind increasing rates of the terrifying brain disease.
He told The Mail on Sunday:
‘We know the single biggest risk factor for Alzheimer’s disease is age, and as our population ages, people will get it more. Secondly, we are getting better at diagnosing and finding Alzheimer’s cases.

‘We are adding the possibility of a third factor – which is exposure to an environmental toxin.’ Professor Cox, director of the Institute for Ethnomedicine in the US state of Wyoming, led the research on vervet monkeys.

In the study, published last week in the journal Proceedings of the Royal Society B, the monkeys were fed with bananas laced with BMAA. Within 140 days, they developed abnormal brain structures called plaques and tangles similar to those found in brains of Guam islanders who died of an Alzheimer’s-like illness, called ALS/PDC.

This disease can manifest itself in some as similar to dementia, while in others its symptoms are akin to Parkinson’s or MND.
In some villages, where locals eat flour derived from contaminated cycad plants as well as BMAA-ridden bats, one in four gets it.

Last night Professor Cox, best known for discovering an anti-HIV drug from the bark of a tropical tree, said growing indications that BMAA might trigger Alzheimer’s and MND were ‘potentially very worrying’.

‘The parts of the vervets’ brains we found plaques in, and the density of the tangles, was very similar to early-stage Alzheimer’s disease,’ he added.

He stressed they were not claiming to have created Alzheimer’s in monkeys by feeding them the algal toxin. The type and location of brain plaques found in ALS/PDC, which they ‘recreated’ in the vervets, is different to that in Alzheimer’s, he noted.

But he said: ‘Something is going on here. BMAA could be a contributory factor in some people.’ Previous studies have discovered that BMAA is commonly found in the brains of Alzheimer’s and MND sufferers – but only rarely in others.

And MND rates are up to 25 times higher than expected in people living by BMAA-contaminated lakes and lagoons.

To date, however, there has been relatively little British research into the potential risk to human health.

Instead, the threat to fish posed by blue-green algal blooms, and other toxins they produce which can leave water users temporarily ill, have taken pride of place.

View all posts by: StefanSchieb